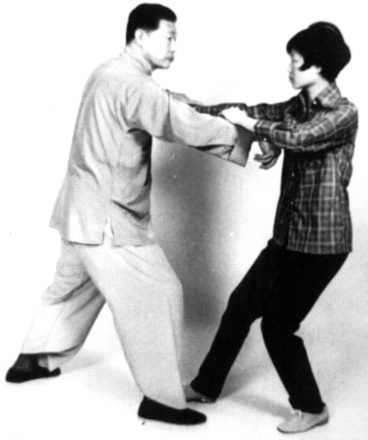 For this section, we thought it best to quote directly from Yeung Sau Chung’s book Practical Use of Tai Chi Chuan (Its Applications & Variations) as translated by Mary Sifu:
The value of Tai Chi Chuan in self-defense is universally acknowledged. Applying it properly, you can neutralize the opponent’s force with a much smaller one, command the situation leisurely and even utilize his force to your own advantage. It is based on the Chinese philosophy of Yin (female characteristics) and Yang (masculine traits) which control all the changes of phenomenon in the Universe. Yin also means softness and inactivity, whereas Yang means strength and activity, but both are not mutually exclusive. Strength can be hidden in softness and activity is camouflaged in inactivity. Constant practice of Tai Chi Chuan will enable you to acquire peace of mind, relaxation of body, not flabby but flexible muscles and an excellent physique regardless of your health at the start. Its value has been proved with numerous examples in China and overseas by those who practice it, regardless of their rank, profession, age or sex.
Mary Sifu has been emphatic in stating that Tai Chi Chuan is an “internal martial art”, an art where the mind precedes every movement and where the underlying ideas are preeminent. From the family’s “thirteen important rules”:
8) Do not exert force, but the idea is there.
9) Action and idea should be in harmony.
10) The idea and energy should be in agreement.

Tai Chi Chuan’s health benefits are becoming more widely known and increasingly supported by scientific research. It is now commonly recommended as one of the treatment protocols for a wide range of chronic conditions including, diabetes, Parkinsons, MS, ME, COPD, arthritis, cardiovascular disease and many others. In general, practitioners experience a heightened level of general health over time with consistent and focused practice. Most report more energy, better sleep, improved appetite, digestion and elimination, improved sexual function, less muscle stiffness, especially as it relates to the back, and lower stress. Those of more advanced age have also noted positive effects on balance and their mental capabilities.