I won’t forget the first time I met Yeung Ma Lee (Mary) Sifu in the Fall of 2008. Mary is Yeung Sau Chung’s second daughter, he had three, all inculcated in the family’s art from a very young age – many thousands of hours of severe training under his watchful eye. Contrary to martial tradition in China, Mary received the full system from her father – conventionally, full transmission of a kung fu family’s art was only passed down through the sons.  As her father writes: “I have been very demanding and strict with all of my students, particularly with my daughters…”

The occasion was a week of training with Mary’s husband, James Yeung in Hong Kong. I had heard about Mary Sifu many many times over the years from my teacher, Jim Uglow, and from his tai chi brothers John Conroy and Joe Balthazar. I had heard about this tiny woman whose glance and disarming questions put fear in your heart; who’s well placed strikes were shocking in their precision and power; who’s pushing skills were extraordinary; who left you dazed and confused wondering how she could generate so much power from such a tiny frame.

I had an invitation to receive her instruction many years before but had to decline due to work commitments (loser!).  I assumed that I had missed my opportunity and the chances I would ever get tuition from her very small.  Why would one of the scions of the Yeung family ever deign to meet with a punter like myself, even if only for lunch?

The rumour spread like an electrical fire one morning before our afternoon training session.  My teacher said something to the effect,  “Mary may (the emphasis was on “may”) have lunch with us” the exact day I can’t recall but I remember that breakfast was abuzz with the news, our normally quiet but happy breakfast conversation had switched to one of elation and worry at the prospect.  You could almost hear everyone’s internal conversations: “I wonder if I will be seated near her?”, “What question should I ask?”, “Should I wear a suit?” and so on.

The atmosphere absolutely crackled when she stepped out of the elevator. I had taken a position as instructed, not far from the escalator as had a number of my tai chi brothers – you might say we were forming a small gauntlet along her projected path to the dining area.  The butterflies were dancing wildly in my stomach.  I’m not sure what I expected but I knew, having never seen a recent picture, that her identity would be unmistakeable.

You could almost hear the air sucked out of the room the instant the elevator doors opened, fifteen or sixteen breaths held simultaneously – thirty eyeballs trained on the tiny woman emerging from the elevator. The aroma of food disappeared, the background noise silent, all traffic stopped – or so it seemed, a moments forever suspended in my memory.

Frankly, she was smaller, more feminine than I imagined. I remember that she was wearing a blazer and carrying a purse, almost daintily, on one arm. Her husband James was also in attendance, just to her right as I recall, providing occasional words of explanation and direction – I imagined – as she began to make her way to our lunch room. She walked with purpose, her vision clear, taking slight notice of the nervous and expectant stares around her.  If it is true that we project chi from our eyes, she may have felt like it was opening night on Broadway, though there was no sign of nervousness or timidity on her part.  She inherited her father’s DNA, survived many hours of daily trainining. She was carrying the mantle of hundreds or years of supreme martial history on her shoulders – a family history replete with martial challenges too numerous to mention, a family undefeated in battle.

Eventually we were all seated, first waiting, respectfully, for the guest of honor to take her seat.  As I recall, there were three round tables in the room, each seating approximately six people – some details, like these are now hazy.  Somehow, thanks to my teacher, I found myself sitting at Mary’s table, my teacher sitting to my left, as I recall. John Conroy, the “family student” sat on her left.

In my corporate career I had wined and dined with billionaires, stood “toe to toe” with corporate titans who had fallen behind on their debts, given speeches to packed rooms, yet, I’m not sure I had ever experienced this level of discomfort, it wasn’t just nervousness, it was pure fear.  The martial world incites our most primal instincts, “flight or fight” I guess the psychologists call it.

I don’t want to exaggerate the scene, much of my reaction was a function of my own psychological makeup, many years of reading and dreaming about the great martial artists of the past, mystics who were said to perform feats of the miraculous, and one family in particular that commanded the attention and respect of the imperial guard; millions of tai chi practitioners around the world owing their practice to this family’s brand of tai chi.  Was this just a daydream inspired by the morning’s heat and humidity?

But it wasn’t just psychology. Something else came into the room.  Years later, I put my finger on it. Western science informs that we all emit photons from our skin, we shine some small measure of light. Well, in Mary sifu’s case, she shined bright, brighter than normal.  She had a luminescence, but more than that, it extended further than what your eyes could discern. Her presence was palpable, as palpable as a warm wind.

“Look at her!” I was yanked from my reverie by my teachers urgent instruction, for all I know, it came silently, lips mouthing those three words, if so the message was clearly received, as if spoken out loud.  I quickly inferred, my conscious attempt to not look directly at her might be misinterpreted as disrespect instead of the it’s-not-polite-to-stair learned from my childhood – certainly, I wanted to “inspect” her, try to guess her age and discern her secret. I also realized that her’s were eyes that could quickly see through your public face, see into your soul – perhaps read my mind?

In the moments that followed, she showed herself a master of the moment, she was “playing tai chi” from the moment she stood and sat among us.  She was fully aware of our baited breath, our nervousness, our fear of untrodden territory. She employed a combination of humour and precise language to both disarm and hold our attention.

But the most magical moment of our lunch was watching Mary sifu demonstrate pieces of the form – from her chair.  It didn’t take much, just a few moves from the beginning of the form, we were like babbling idiots – or at least I was.  What we had just seen was not entirely human, reptilian, snake-like, her bones disappeared, her eyes suddenly belonged to some primal spirit. “Shape shifter” came to mind. Perhaps I would find some other past time, one where I had some chance of mastery, checkers, tic-tac-toe? The form that I had felt some pride over bared little resemblance to what I had just seen.  Grace, precision, and power were in clear abundance.

I could only thank God that I had not been asked to demonstrate some of the form as my tai chi brother from Ireland had been that afternoon. Truly, it was a day to remember. 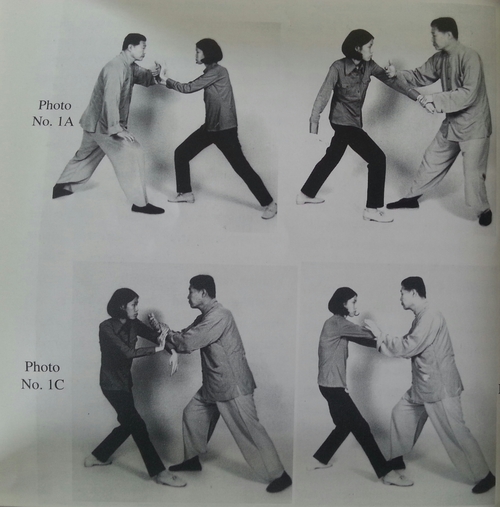